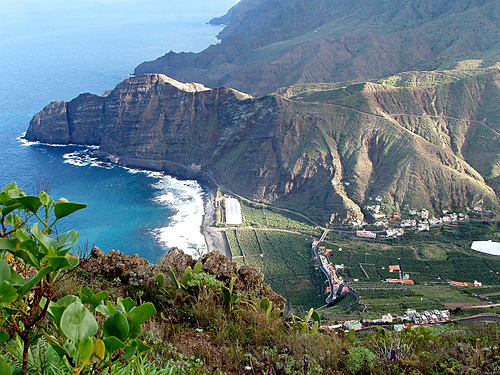 The north of Gomera is green ravines, goods, on which small white villages grow, banana and palm plantations. Tour TF-711, connecting San Sebastian with Vallehermoso, will be an unforgettable experience – I don't think anyone can resist the urge to constantly look back, to take a second glance at Teide volcano.

Just 16 km north of San Sebastian is fertile, green valley, whose slopes are covered with banana trees and vineyards. The town of Hermigua stretches along its bottom, divided into two parts: Valle Al to ("Upper valley") oraz Lower Valley ("Lower valley"). Valle Al is proud of the 16th-century church of Santo Domingo de Guzman. The temple has an interesting one, double facade – the entrance on the left side is most likely the remains of the chapel of St.. Dominika. Inside, a baroque altar draws attention, wooden choir and Mudejar ceiling. In addition, there is a building in the town built between the 18th and 20th centuries. Church of the Incarnation. It is worth visiting the Museo Etnografico de La Gomera (ethnographic Museum) and the Los Telares folk art center. Persons, who liked gofio, can visit the restored Molino de Gofio, in which you can find out, how to prepare them, and finally try the gofio served with sweet wine. Moreover, there is a nice park in the town, where you can see the lucha canaria ring. There are two very nice beaches near Hermiguy – greater Playa de Santa Catalina, with a salt water pool, and the smaller La Caleta, considered one of the most attractive in this part of the island. There is a post office in town, health clinic, pharmacy, police station and gas station (one of three on the island). The San Sebastian-Vallehermoso bus stops here several times a day. The rustic-style Apartamentos Los Telares are highly recommended, run by a German who loves the island, Hotel Rural Ibo Alfaro and the charming Villa de Hermigua, where guests have access to a common kitchen. For longer stays, you can stay at the Apartamentos Jardtn La Punta at the top of the cliff. Hermigua and its surroundings are one of the best places on the island to sample traditional Canarian cuisine. For grilled tuna with mojo uerde, go to the El Silbo restaurant, although you can eat equally tasty in Las Chacaras. If he wants to try Basque cuisine, you should go to Restaurante Basco Iraxe. For fresh fish, visit the Macondo bar on Playa de la Caleta.

If anyone, walking in the woods, he will hear unusual sounding birds singing, perhaps he will witness a conversation, which two inhabitants of Gomera lead in the silbo language. The Gomero whistle, that is, the language of whistles, it is used by the inhabitants of the island to communicate over long distances, e.g.. to convey the message from one side of the valley to the other. The sound of the words is imitated by whistles of various heights and lengths, and their sound is more like bird singing than traditional whistling. Apparently, the whistle of good silbadors can be heard from a distance 1,5 kilometers, very good at 4 kilometres, and perfect for over 10 kilometers. The language of whistling was spoken on the island even before the arrival of the Spaniards. According to one theory, it was used by members of North African tribes, which the Romans cut their tongues before being sent to the island. Silbo existence for exiles the only way to communicate, in addition, a way, which greatly facilitated the transmission of encrypted messages during battles with the Spanish invaders. With the arrival of the Spaniards, especially after the unsuccessful uprising of St. 1488 r., the whistling tongue was almost gone. Ultimately, it survived thanks to the Christianized Guanches, who adapted it to convey messages in Spanish. The inhabitants of La Gomera continue this tradition to this day. Intensive work has been underway for several years to popularize and promote the traditional language of whistles. From 2001 r. the silbo language is compulsory at school. Traditional whistling can be heard in many places, e.g.. on Naviera Armas ferries operating on the Gomera-Tenerife route, some messages are also given in silbo.