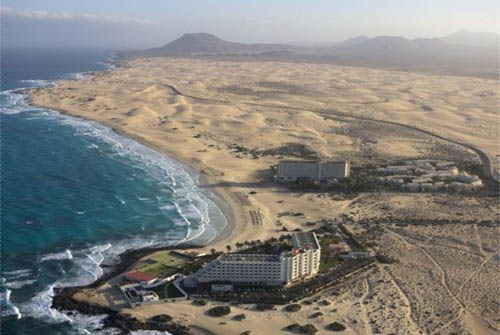 Jadąc z Puerto del Rosario do Corralejo, you drive through a real desert. On the episode over 10 km, on both sides of the FV-1 road are stunning white sand dunes, which fall gently into the azure sea.
Entry to the dunes is unlimited, Only developers are not allowed here, so that virtually the entire area is undeveloped (the mighty Riu Hotel is an exception, which was built before the entry into force of the ban). For those traveling by bus, there is a line to reach the dunes #3 (you have to ask, for the driver to stop at the Los Hoteles stop).

Corralejo and its surroundings to the north are one of the island's main holiday areas. Hotels and apartments have been built around a small fishing port. Low, colorful buildings and a few winding streets dotted with restaurants, which serve pretty decent food, create a charming corner. Unfortunately, the farther from the port, the more modern buildings without expression, whose only advantage is this, that they are not tall.

There are several nice beaches in Corralejo itself, however, most people prefer to sunbathe outside the city, w Dunales de Corralejo Natural Park.

A trip to Lanzarote

Due to the distance and cost, few tourists visit more than one island at a time. Corralejo to Lanzarote is only half an hour away, and a return ticket costs approx. 40 €, therefore it is worth taking the opportunity to visit the neighboring island. You can organize the trip yourself, by ordering a car a few days in advance, who will be waiting at the marina of Playa Blanca (Lanzarote). The offer of an organized trip is exceptionally profitable (www.aquaticket.com). In price 40 € includes transport from / to the hotel and a trip to El Golfo, Los Hereideros and Timanfaya National Park.

From Corralejo you can perfectly see less than a distance away 2 km from the shore islet Wilków, so named because of a species of seals that once inhabited it (sea ​​lions). The island has just 4,5 km2, and the central Caldera de la Montana rises on 182 m n.p.m. From 1982 r. the island is under protection, and instead of seals exterminated by fishermen, you can meet tourists here. Do 1968 r. the lighthouse keeper Antonio lived with his family in the lighthouse in the northern part of the island. Islote de Lobos is the perfect place to swim in natural volcanic coves filled with azure water. There are several trekking routes waiting for hikers – the island is part of a protected area, therefore it should not be removed from them.

A demanding trip is the ascent to the top of Caldera de la Montana, from where all three islands are beautifully visible: Logos, Fuerteventurę i Lanzarote.

Planning to spend a day on the island, it's worth taking your own food and drinks, and necessarily sunscreen and a cap – on Islote de Lobos it is hard to find the slightest scrap of shade. You can reach the island from Corralejo on one of the two small ferries: "Isla de Lobos and" El Majorero ". You can also sign up for a full day Corralejo-Lanzarote-Isla de Lobos excursion by catamaran "Celia Cruz" or an hour-long cruise around Islote de Lobos. Tickets can be bought at the marina and at wooden kiosks next to the yacht marina.