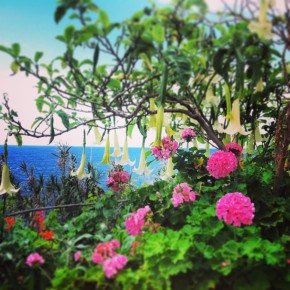 Tenerife is a kind of miniature continent.

The area of ​​the island is only a quarter of the smallest voivodeship in Poland. There are more than a dozen microclimates on 2,000 square kilometers and the sun shines at twice the angle.

For visiting tourists, the island has three faces: the desert south, volcanic center and green north.

The case with precipitation is as follows: the most rainy place on the island is historic La Orotava. It is no less still far from the rainfall of London. In the north, the wettest months are December - an average of seven rainy days a month, and January - seven days. In early spring and late fall, the number of rainy days varies from five to six per month. From April to October it is only two or four days. The difference in air and water temperature between the north of the island and the south is not significant, and in summer it is none.

Due to this slight climatic difference, the northern part of the island is green, rich in various plant forms. Sometimes the landscapes are reminiscent of exotic Weznzuela or Puerto Rico. Beautiful juicy-green banana plantations growing along the coastal areas are not covered with giant, gray tarpaulins as it looks to the south. Flowers, that bloom literally everywhere, only here they have all the colors of the rainbow.

If you are considering vacationing in Tenerife ,believe me, no umbrella is needed in the north!