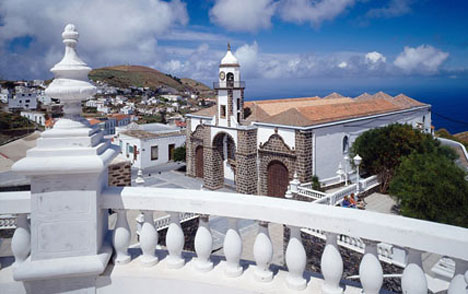 The eastern part of the island is covered with misty hills and high cliffs, which, with a few exceptions (Well of Las Calcosas, Puddle Manso, Tamaduste i La Caleta), prevent access to the sea.

Villa of Santa Maria de Valverde, colloquially called Valverde, located in the north-eastern part of the island, at a height of approx 600 m n.p.m., to stolica El Hierro. It is the only one of the capital cities of the archipelago without direct access to the sea. The name of the smallest Canarian capital comes from the Spanish words valle verde (green valley), which is probably a reference to the color of the hills surrounding the city.

Although in Valverde all the most important institutions and offices of the island are concentrated (m.in. Valverde Island Council, Government Delegation, hospital, courts), the town, often shrouded in fog, looks nothing like a typical capital city. Low buildings, narrow streets, little car traffic and just 1,8 thousand. residents – it all does, that Valverde looks more like a provincial town.

Little is known about the history of Valverde – all historical documents were destroyed in a fire from 1899 r. Before the Spanish conquest, the village of Bimbaczów was located in the place of the present capital, called Amoco. Probably founded in the 15th century. Valverde was a nondescript village right up to 1610 r., when, after a terrible hurricane, the inhabitants of the island began to seek refuge in the vicinity of the present capital. From 1926 r. El Hierro is home to the Cabildo Insular (Island Town Council).

The most important, and basically the only monument in Valverde is the Iglesia Nuestra Seńora de la Concepción from the 18th century. Quintero Nuńez Square, surrounded by a white colonnade, stretches slightly above the church, which offers a beautiful view of the town. In the square, called Cabildo Beach by the locals, the town hall building rises. It is worth paying attention to its interesting facade in the Canarian style. Work on the construction of the town hall began in 1910 r., however, due to financial problems, the building was not completed until 1940 r.

The town is also home to the Casa de las Quinteras ethnographic museum, where you can learn about the culture and past of the first inhabitants of the island.

There are also plans to open the Island History Museum, in the building opposite the church, however, it is not known, when exactly will it happen.

At the entrance to the city, there is a small white chapel in front of the hospital, Hermitage of Santiago. It is not known exactly, when it was created, however, it is suspected, that it is the first religious building erected on the island. Unfortunately, after renovation in the 19th century. there is not much left of the original building.

Descent of the Virgin of the Kings

When in 1741 r. the island was hit by a drought, the inhabitants asked the bishop for permission to solemnly transfer the statue of the Virgin Mary from the Magi from the chapel in the west of the island to Valverde in a procession.

In early June, undaunted by the refusal, the shepherds headed west of the island and, under cover of night, set off in procession, praying for rain. As you can guess, the longed-for rain has fallen, and the grateful inhabitants keep the tradition to this day. Every four years in June, La Bajada de La Virgen de los Reyes is held (next in 2009 r.), not only the most popular holiday on El Hierro, but also throughout the archipelago - during this period the island's population at least doubles, and booking accommodation is almost a miracle.

The celebrations start at 5.30 mszą w Hermitage of the Virgin of the Kings. The procession then heads towards Valverde – its participants have approx 30 km along the island, so approx 19.00. The procession opens with a colorful procession of dancers dressed in traditional white and red costumes, who dance to the beat of the beating drums. On the way to Valverde, the procession stops several times – During the stops, the tired pilgrims are given food and drink.

During eight days, what the figurine spends in Valverde, concerts are held in the city, lucha canaria shows etc.. The joyful celebration continues throughout the month, because the statue visits all the villages one by one.

The route, which the procession traverses, zwaną Way of the Virgin, marked as GR 131, you can go alone at any time of the year – however, you have to reserve at least 8 hours one way.