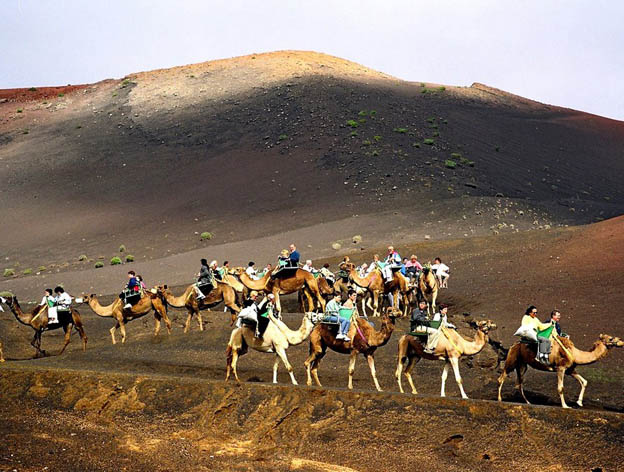 First of September 1730 r. between 9.00 a 10.00 in the evening the earth suddenly opened up … A mighty mountain emerged from within, from which peak flames were emerging – so in his diary Andres Lorenzo Curbelo, a priest from the town of Yaiza, described the first days of the most powerful volcanic eruptions in Lanzarote. Within 6 subsequent years 25 volcanoes were constantly rolling lava, flooding fertile fields with it and forcing the inhabitants of the southern part of Lanzarote to flee north or to other islands of the archipelago (during this period counting 5 thousand. inhabitants, the population of the island has decreased by half). The last volcanic eruptions in this area took place in 1824 r.

W 1974 r., thanks to the efforts of Manrique, an area flooded with lava with an area of ​​over 5 thousand. hectares were converted into the Parque Nacional de Timanfaya, whose symbol is designed by the artist Diablo de Timanfaya. The landscape of the park can be described in many words: lunar, dramatic, devilish, however, it's best to see this place with your own eyes, because it is unlike any other. To, which is most surprising, it's a range of colors – at first glance it seems, everything is black, however, after a while you will notice browns and intense reds. The unearthly silence is also amazing - in this unusual national park, where there are practically no plants or animals apart from the lichen or drygrowths visible here and there, you can't hear anything at all.

Basically, you visit the park on a bus tour of around an hour on the spectacular Ruta de los Volcanes. You can also decide on a slightly less scenic trip into the park on camels, or on one of the hikes organized by the park staff (tooth. frame Walk between the volcanoes).

Form, what the lava takes, and how it travels depends on the chemical composition of the magma, volcanic eruption temperature, etc.. However, even a very novice volcanologist can distinguish between pahoehoe and aa lava with the naked eye.
The names derived from the Hawaiian language refer to the shape of a congealed stream – the heavily melted pahoehoe lava looks like coils of ropes when it solidifies, and on its almost smooth surface you can walk barefoot without any major problems. Meanwhile, the surface of the second type is irregular and full of sharp-edged stones – each attempt to walk on it without shoes ends with the sound of “aa”.

Route of the Volcanoes

The shuttle bus departs every half hour from the car park on Islote de Hilario towards Montańas de Fuego (Mountains of Fire), that is, part of the park, in which a dozen or so craters remain from active volcanoes in the 18th century are concentrated. During the ride, tourists listen to stories in three languages (Spanish, English and German) about the history of the park, colored with poignant music. The bus stops several times at viewpoints, however, it is not possible to leave the vehicle. To fully appreciate the charms of Ruta de los Volcanes, it is worth coming to the park as early as possible, before large groups of organized tours arrive, and on the bus it is necessary to take a seat by the window on the right side. Organized groups travel through Ruta de los Volcanes on their own buses.

Waiting for the bus, it is worth visiting the El Diablo restaurant and watching the views from the observation deck, but most of all you have to take part in some interesting experiments presented by the park's employees. It is worth picking up a fine litter, which turns out to be extremely hot, see, like dry twigs thrown into a small hole in the ground, they spontaneously catch fire, and the water poured into a crack in the ground after a few seconds shoots up into the sky like a real geyser. Volcanologists say, that all of these effects are the result of it, that there is still a sea of ​​hot lava beneath the earth's surface. Others believe, that it was perhaps the work of the devil of Timanfay…

Route of the Camels

An interesting idea to see a piece of the park may be Ruta de los Camellos. Persons, who await a leisurely camel ride among the lava fields, may feel a bit disappointed – the atmosphere is more like a carousel in an amusement park. The bustle and laughter, however, cannot drown out the beautiful views, and with the right attitude, this ride will be fun, especially for children.

Walk between the volcanoes

Persons, who will not feel satisfied watching the park through the bus window, can sign up for free walking tours organized by the park's employees. Hikes with an English-speaking and Spanish-speaking guide take place in groups of no more than seven people and are of great interest, therefore, regardless of the season, you must reserve a place by phone or via the Internet (tel928840839, manchablanca@mma.es) preferably at least one month in advance.
Two routes have been prepared for hikers: Ruta Tremesana (3 km; 2-3 at, easy; pn., Wed, pt.; collection of Fr. 10.00 przed Mancha Blanca Visitor Center) oraz Littoral Route (9 km; ok. 6 at; pregnant; once a month). If someone feels up to it, can cross the Ruta del Litoral along the coast without a guide, however, before going on a tour, he must report the exit to the Centro de Visitantes, where he will get a suitable map. You must bring a hat to protect yourself from the sun for each hike, food and drink and a bag for your own garbage.

Another option is the Canary Trekking offer – its owner, who once worked as a tour guide in Timanfaya National Park, organizes trips to the Parque Natural de los Volcanos. During several hours of hiking among lava and volcanoes, you can admire breathtaking views, and you can touch everything, look everywhere and go almost everywhere.