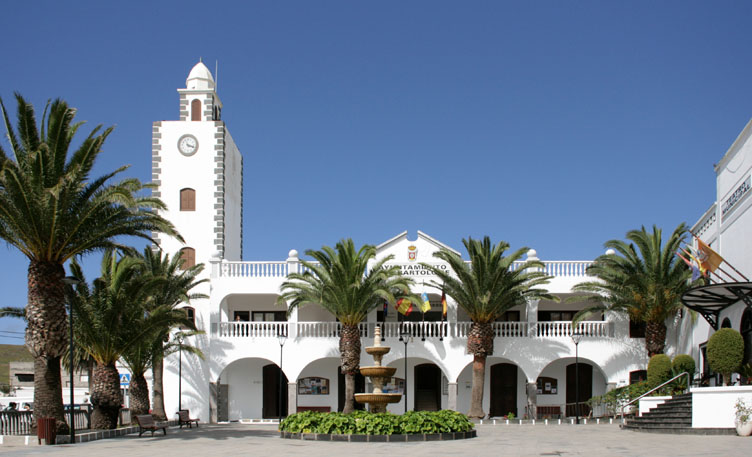 On the southern coast of the island there are holiday resorts, however, it only takes a few minutes to drive into Lanzarote, to discover an almost deserted volcanic land. The valley of La Geria, covered with mysterious holes and stone walls, makes the greatest impression.

A town with approx. 17 thousand. inhabitants is the capital of the commune of the same name. It may not be as cute as Haria or Yaiza, however, it is worth visiting due to two interesting museums: Tanit Ethnographic Museum (Tanit Ethnographic Museum) oraz Museum of Local History Casa de Mayor Guerra (historical Museum). Both establishments occupy beautiful 18th-century mansions surrounded by gardens and allow you to learn about the history of the people who lived in Lanzarote from the times of the Guanches to the present day.. Being in San Bartolome, it is also worth visiting the 18th-century Casa Ajei (Ajei is the name of the Guanche settlement, which existed in this place before the arrival of the Spaniards) and to the 16th-century church.

Information on the city and the commune can be obtained from the tourist information office. Access from Arrecife is provided by buses #14, 15, 16.

On the road from San Bartolome to Tahiche is the archaeological site of Zonzamas, where the remains of the palace of the last Mayan leader were found – King Zonzamas. The cave palace is commonly known as Cueva del Majo. The remains of an indigenous village and ąueseras have also been found here – channels carved in the stone, whose destiny remains a mystery.

The clever farmers of Lanzarote

It's hard to imagine, so that on the ground tightly covered with lava crumbs, on which it only falls 200 mm of rain per year, agriculture could develop at all. Meanwhile, in Lanzarote, many people make a living from agriculture.

How it's possible? It turns out, that slight (2 mm-6 cm) and porous lava crumbs, called lapilli or picón, not only prevent water evaporation from very dry soil, but also has a great ability to absorb moisture from morning dew, which they lead to the ground. Thanks to this, onions are successfully grown on the island, tomatoes and, above all, grapevines.
To protect delicate plants from the almost constantly blowing wind, ingenious farmers from Lanzarote, small depressions in lapilla are surrounded by semicircular stone walls, called zocos.

On the wine route through La Geria

The valley of La Geria stretches from Mozaga to Uga. The area on both sides of the road connecting these two towns is dotted with pits carved in the black volcanic ground, in which single grapevines grow. Someone reportedly counted, that the dimples are well over 10 thousand, no wonder then, that La Geria is Lanzarote's largest wine region – more than 2 million liters of wine per year. There are several vineyards in La Geria – most of them run their own stores. Due to the difficult growing conditions, wines from Lanzarote are relatively expensive (5— € 20 per bottle), therefore, it is worth tasting them first before buying. In most vineyards you have to pay approx. 1 €.

You can start your journey on the wine route in a continuously operating route from 1880 r. Bodega Mozaga on the main road, just outside San Bartolome. Just a kilometer north of the vineyard stands the white Monumento al Campesino (Farmers Monument), designed, of course, by Cesar Manrique.
To be constructed set in 1968 r. The monument uses welded water containers from fishing boats. In the immediate vicinity of the monument, there is Casa-Monumento al Campesino with a restaurant and a souvenir shop.
At the roundabout, where Monumento al Campesino stands, should be reflected to Masdache. Po 2 km on the right and left side of the road you can see the characteristic black zocos walls and the first vines. Po 5 km you will reach the oldest vineyard on the island, El Grifo, guarded by a neck designed by Cesar Manrique. It houses the Wine Museum.

Heading west, passes through the small town of Masdache, behind which, as far as the eye can see, there are vineyards. The next stop on the wine tour is La Geria. The road through La Geria ends in the small town of Uga, which from a distance looks like a white oasis in the black desert. The impression is intensified by camels grazing on the outskirts of the town - dromedaries are bred in Uga, which later drive tourists to Timanfaya National Park. Those tired of the trip can enjoy home-cooked meals, praised by the locals, Casa Gregorio and the elegant and quite expensive Bodega de Uga; you have to be careful here, because there are no prices on the card and you can be unpleasantly disappointed after receiving the bill. There is the famous La Ahumaderia de Uga fish smokehouse in Uga, where you can buy excellent salmon. You can stay overnight at the Finca de Uga agritourism farm.