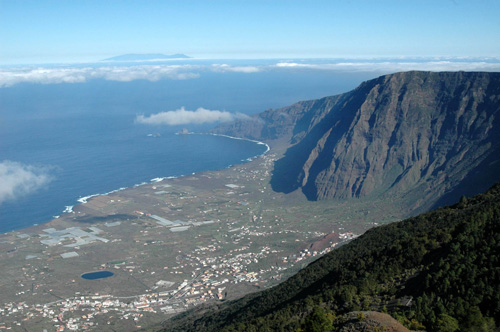 El Golfo is one of the most characteristic elements of the El Hierro scenery. The bay was most likely formed as a result of a part of a huge volcanic crater sliding into the sea. About that, How huge the volcano must have been is evidenced not only by the length of the bay (16 km), but also the surrounding high na 1000 m slopes. El Golfo is the greenest and warmest part of the island, that is why most of the islanders live here, who mainly cultivate bananas, pineapples and flowers.

One of the treasures of El Hierro is Lagarto Gigante, that is, the giant lizard, found only on the island. For many years this species was considered extinct, however in 1940 r. a colony of reptiles was found on Roques de Salmor – this is why they are often called Salmor lizards (Salmor lizard). At that time, no one was interested in protecting this species, and its last members died out very quickly. For the next 30 years, until the discovery of v 1970 r. a small group of reptiles living in inaccessible parts of the mountains, once again it seemed, that the giant lizards are gone. The discovery resulted in the creation of the genre's restoration center, Lagatario, where you can still admire those perhaps the oldest inhabitants of El Hierro.

Las Puntas is the first town, which is encountered after driving through the tunnel connecting the northern part of the island with El Golfo. It's worth staying here, at least for a while, and maybe even a night in the smallest hotel in the world. In years 20. XX w. the town served as an important port of El Hierro – ships and sailing ships loaded with exotic goods departed from a small stone harbor for northern Europe (e.g.. Bananas and pineapples grown in El Golfo). Currently, Las Puntas is a small and pleasant resort. One of its biggest attractions is perched on a stone pier, the smallest hotel in the world entered in the Guinness Book of Records, which has only four rooms. Although there is no beach or even a natural swimming pool in Las Puntas, amateurs of sun and bathing will not go away empty-handed. A few years ago, the water park Cascadas del Mar was created in the immediate vicinity of the hotel, where the pools are waiting, waterfalls, colored lava fountains and bridges. From this part of the coast there are breathtaking views of Roques de Salmor emerging from the sea and the entire El Golfo.

There are surprisingly many places to stay in this small town. The best hotel is Punta Granda – due to the large interest in this place, it is worth making a reservation well in advance. Other places of interest are Pensión Salmor, Caribe Pension and Apartments, Bungalows Los Roąues de Salmor with their own swimming pool and Finca Wapa apartments with a truly rustic setting. They feed well in the hotel's restaurant Punta Granda, which specializes in soups and fresh fish dishes, and in Naomi on the seashore, where Canarian and Australian dishes are served. Buses connecting Valverde with La Frontera stop several times a day in Las Punta.