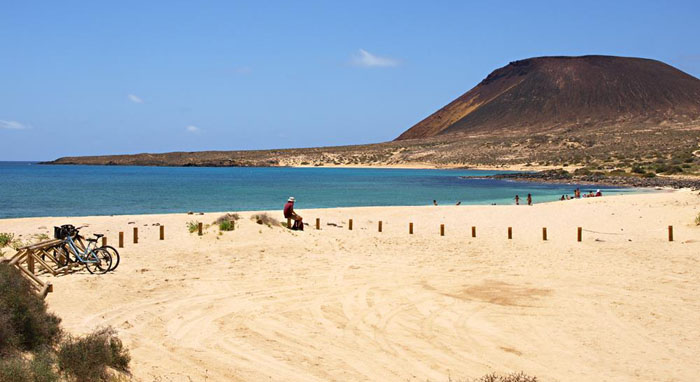 The Spanish word graciosa means "charming" - that's what this island shimmering with many shades of red is, a paradise for people looking for peace and respite. Visible from Mirador del Rio La Graciosa despite being less than that 30 km2 is the largest island of the Chinijo archipelago north of Lanzarote, which the locals call "little Canaries". The atoll, consisting of five islets, is a strict nature reserve inhabited exclusively by birds - only people live on the island of La Graciosa, who moved here with the opening of a fish processing factory at the end of the 19th century. (and they stayed even after her bankruptcy).

There are three inactive craters in the central part of the island, whose dark brown color contrasts beautifully with the white sand.

There are only two towns on the island: Caleta de Sebo, where the island's population and all services are concentrated, and the holiday village of Pedro Barba.

The small Caleta de Sebo on the south coast of the island is the main and actually the only population center. It is also the only place, where you can stay for the night and grab a bite to eat. Modest, but clean rooms offer Pensión Enriqueta and Pensión Girasol. You can also rent apartments El Sobmreńto and Apartamentos la Graciosa. There is a free campsite on Salado Beach, run by the Teguise Council. You need to ask for permission to pitch a tent at no. ^928845985. The choice of restaurants is perhaps not too big, the kitchen is excellent.

The island has some of the most beautiful beaches in the archipelago: their characteristic feature is soft sand, azure water and few . sunbathers. A must visit is Playa de las Conchas, or 400 meters of white sand, from where there are unforgettable views of the remaining islands of the Chinijo archipelago. Safe bathing is possible in Playa de Salao just outside Caleta de Sebo, 2 km further east, na French Beach, oraz na Beach Kitchen, above which rises an intriguing yellow mountain. Both beaches can be reached on foot via the coastal trail. It is also popular located between Caleda de Seba and Pedro Barba Playa Barranco. You can try your hand at kitesurfing on the beaches of La Graciosa (Kite Center, www.islagraciosa.com) under the watchful eye of a nice Italian, who came to the island a few years ago and stayed.