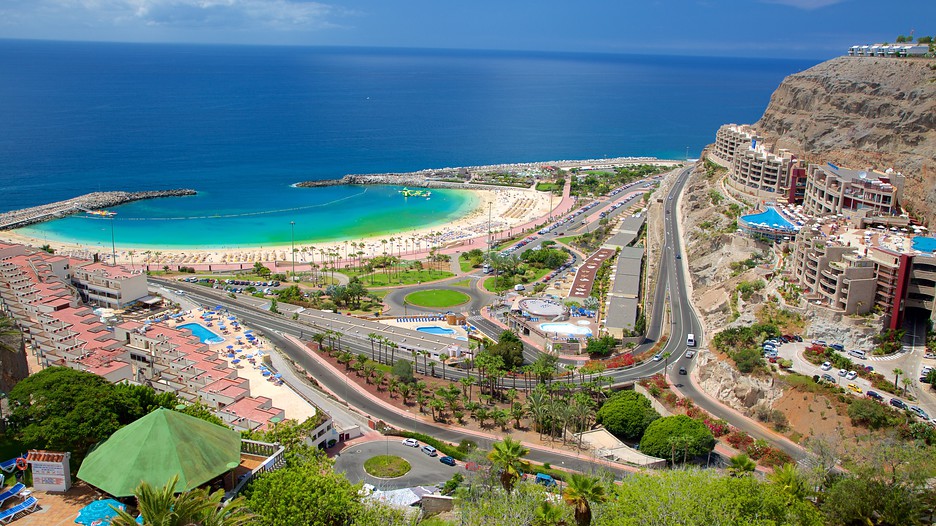 In the initial period, as the first city of the archipelago founded by the kings of Castile, Isabella and Ferdinand, the capital of Gran Canaria was called Real de las Palmas. Currently, Las Palmas de Gran Canaria is not only the largest city of the island, but also the entire archipelago, the most cosmopolitan, a modern and busy metropolis of the Canary Islands.

The history of Las Palmas de Gran Canaria begins on the day the Spanish conquistador Juan Rejón arrives on the island, which 24 June 1478 r. landed at the mouth of the Guiniguada Gorge, that is there, where the city's oldest district is now located, Vegueta. After the island was incorporated into the Castilian crown, the military camp established by Rejón slowly transformed into the most important city of the archipelago, acting as its administrative and political center. It was here that the Canary bishopric and the inquisition had their headquarters. Is said to be, that in 1492 r. Christopher Columbus stopped in Las Palmas de Gran Canaria, to repair damaged sailing ships before continuing their voyage.
The city got rich mainly from the trade in cane sugar and intermediation in the exchange of goods from South America. There were also downsides to the streak – it attracted riches hungry for pirates. To, which the famous Briton did not, Sir Francis Drake, succeeded in 1599 r. Dutch pirates led by Pieter van der Does, who plundered and burned the city in just a few days.
As the demand for cane sugar decreased, the city's prestige decreased to such an extent, that the capital of the archipelago in 1821 r. Santa Cruz de Tenerife was formally established. Happiness smiled again 1 do Las Palmas, when in the mid-19th century, after the archipelago is exempt from customs duties, has become one of the liveliest ports in the Atlantic, which it remains to this day.

W 1927 r., after the archipelago is divided into two provinces, Las Palmas de Gran Canaria took over the function of the capital of the so-called. eastern islands (Great Canarii, Fuerteventury i Lanzarote).

Visiting Las Palmas de Gran Canaria should start with a visit to the historic part of the city. It is right here at 1478 r. Juan Rejón landed with his men and founded the first Castilian city of the archipelago. One of the biggest attractions is Casa Museo Colón – beautifully restored traditional Canarian mansion, where the Museum of Christopher Columbus is located. Building, residence of the first governors, is worth attention: is a residence with an interior patio, decorated with typical wooden balconies, palm trees and exotic vegetation.

In second, the smaller patio is home to two huge macaw parrots. Inside the museum there are interesting exhibitions presenting Columbus' journeys (in one of the rooms, even the interior of one of the sailing ships of the famous explorer was reconstructed!) and the role of the Canary Islands as a stopover on the way to the New World. In addition, in the basement of the facility, you can see utility items and stone religious products of South American Indians. The Ermita de San Antonio Abad is just a few steps away – the oldest chapel in the city, built on the site of the famous military camp of Juan Rejón.

Contemporary art lovers should check out the nearby Centro Atlantico de Arte Moderno CAAM, where you can see works by 20th-century Canarian artists and interesting temporary exhibitions.

Another noteworthy place is the Plaza de Santa Ana surrounded by historic tenement houses, which is guarded by cast bronze statues of nice dogs.

There are historic buildings of historical importance in the elegant square, administrative and religious, m.in. 17th-century Palacio Regental, Casas Consistoriales building from the 19th century, Episcopal palace (Bishops' Palace) oraz Cathedral of Santa Ana. Construction and the cathedral began at the end of the 15th century., but work on its beautification continued in the 17th and 19th centuries., that is why it presents many architectural styles - from the gloomy neoclassical façade to the beautiful gothic interior. I'm going to go up the tower, from where the panorama of the city is beautifully visible. W Dioccsnim Museum of Sacred Art (Museum of Sacred Art) you can see typical exhibits for this type of place – religious sculptures, painting and manuscripts.

South of the Plaza de Santa Ana is the Museo Canario dedicated to the history and culture of the Guanches, in which statuettes of deities were displayed, mummy, skeletons, tools and other everyday items and an amazing collection of skulls and mummies. In addition, in the museum you can see models of Guanche houses and a replica of the Cueva Pintada in Galdar. Just a few steps away you can move to a small provincial town, because that is what the green Santo Domingo Beach makes an impression, with a nice church and boys playing football.