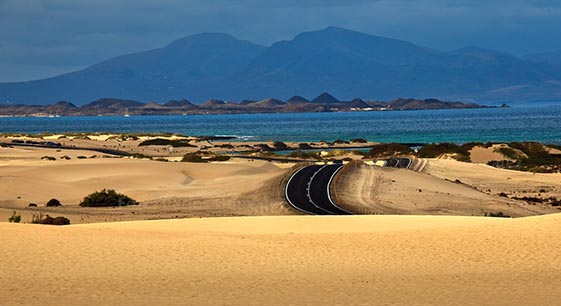 Jadąc z Puerto del Rosario do Corralejo, you drive through a real desert.
On the episode over 10 km stretch out the stunning white sand dunes, which fall gently into the azure sea. Entry to the dunes is unlimited, Only developers are not allowed here, so that virtually the entire area is undeveloped.

It is undoubtedly the most beautiful town of Fuerteventura, perhaps the only ones really worth visiting. The town is already enchanting from afar – the white buildings contrast beautifully with the surrounding cinnamon hills and the almost always blue sky. Today he only lives in Betancuria 600 people, however, it is already visible at first glance, that the town has had years of true splendor behind it.

From the Portuguese 'beach, on which the wind blows”, is a beautiful sandbank, approx. 6 km, on the eastern shore of the Jandia peninsula, although customarily this name is used to describe beaches that stretch continuously across 22 km south of Costa Calma, along the FV-2 road. Fine white sand washed by the turquoise sea, which in some places creates lovely lagoons, is one of the most photographed and visited places in Fuerteventura. Even though the mighty resort of Costa Calma has been erected on the northern tip of Playa de Sotavento, the beaches are not crowded.

Just 100 km separates Fuerteventura from the African coast - perhaps that is why the desert island resembles it so much. At first glance it seems, it's flat, a piece of sun-dried land, where little can be seen except the most beautiful beaches of the Canary Islands The delight of the inhabitants over its natural beauty ceases to be surprising after a few hours. Fuerteventura is geologically the oldest in the archipelago - erosion has turned the once pointed peaks of the volcanoes into gentle hills, resembling a stand with oriental spices, such as peppers, cinnamon, turmeric or cardamom. Each sunset and sunrise is a true blaze of colors, that's why the inhabitants call it "the island of light".

Fuerteventura's name is translated in two ways – according to some, it refers to the constantly blowing strong winds here (strong wind), according to others to Jean de Bethencourt, who at the sight of her exclaimed fuerte aventura, which means "great adventure!”.

When the first Europeans came to Fuerteventura, the island was inhabited by the Majos tribe, which – like other peoples inhabiting the Canary Islands – it came most probably from North Africa. During the time of Majos, the island was divided into the northern kingdom (Maxorata) and southern (Jandia), separated by a stone wall. Its fragments are still visible today at the level of La Pared ("wall").

Fuerteventura was already known to the ancient Romans, who called her "Planaria", and this is due to the characteristic, flat topography. Although European merchants and slave traders visited the island many times, only a French conquered it, Jean de Bethencourt, w 1404 r. The French, acting with the consent of the King of Castile, captured the island without much resistance from its inhabitants and introduced a feudal system on it. Betancuria is also the work of de Bethencourt, a town in a fertile valley not exposed to pirate attacks, which for many years was the capital of Fuerteventura.

From the moment of the conquest, the island was systematically populated, though very slowly, and its new inhabitants, for fear of pirate attacks, rather settled in the interior.

Over the following centuries, Fuerteventura passed from hands to hands of successive feudal lords. Because they didn't usually live on the island, to ensure order and security at the end of the 16th century. the then king of Spain appointed a military commander of the island. Over time, the military began to play an increasing role in management, and in years 1708-1870 they took over completely. Their seat was the famous Casa de los Coroneles in Olivia.