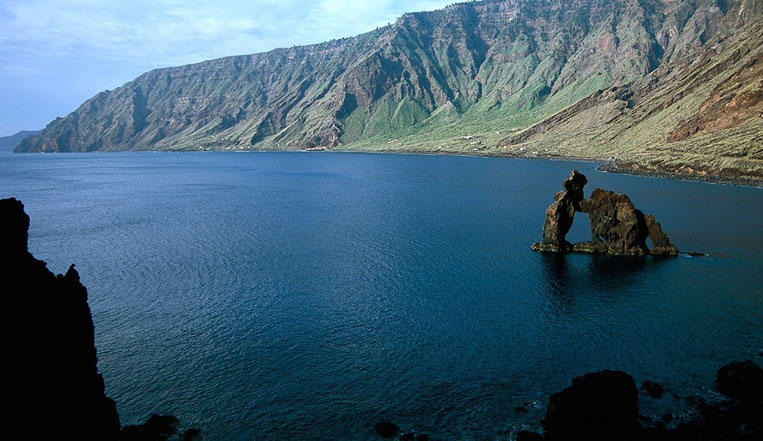 Las Playas Bay is sometimes called "a lost corner on a lost island."”. This is the impression you get, when, after leaving the tunnel connecting Las Playas with the rest of the island, you see a dozen white houses, three black beaches and the silhouette of an elegant parade looming on the horizon. Undoubtedly, the greatest attraction of the picturesque bay is the intriguing rock formation called Roque de Bonanza emerging by the shore. Interesting form and beautiful location make it, that the 200-meter Skata of Happiness is the most photographed place on the island and one of its symbols.

This is one of the most characteristic elements of the scenery of El Hierro. The bay was most likely formed as a result of a part of a huge volcanic crater sliding into the sea. About that, How huge the volcano must have been is evidenced not only by the length of the bay (16 km), but also the surrounding high na 1000 m slopes. El Golfo is the greenest and warmest part of the island, that is why most of the islanders live here, who mainly cultivate bananas, pineapples and flowers.

The Spanish word sabina means juniper, while sabinar refers to the juniper forest, which the western part of the island is covered with. However, it is not an ordinary forest – the plants, under the influence of strong northeastern winds, leaned towards the ground and became surprising, twisted forms.

El Hierro is the smallest (not counting the uninhabited islotes and La Graciosa), least populated (suddenly 10 thousand. residents) and the least known island of the archipelago.

To all those "least" it is worth adding a few "most" and "most", because it is also the westernmost point of Europe, the most volcanic of all the islands (over a thousand volcanoes have been discovered on its surface) and quite possibly the safest place in the world.

This small island occupies an extremely important place in world history - until the discovery of America by Christopher Columbus, it was considered the end of the world, a do 1884 r. through its westernmost point - Cabo de Orchilla – ran the prime meridian, therefore the island is often called Isla del Meridiano – The Meridian Island.

You can quickly feel at home on El Hierro - everyone knows each other, no one locks the door of the house, and tourists are treated with great courtesy and kindness. Anyway, this exchange of courtesy is two-way - rather travelers reach El Hierro, who respect the island, her story, traditions and inhabitants. Neither are tourists returning here many times, nor even less herreńos (the people of El Hierro) they do not want, that the island becomes a center of mass tourism.

W 2000 r. UNESCO has declared El Hierro a world biosphere reserve, and the authorities plan to make it the world's first energy-self-sufficient eco-island.