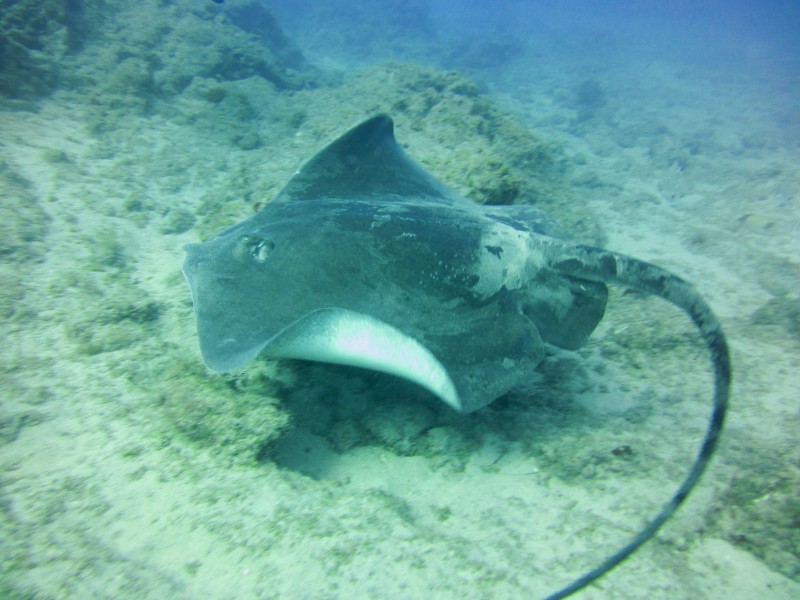 Stingrays and sharks in Tenerife.

Stingrays and sharks belong to the same family of fish - cartilaginous fish. A common feature in their bodies is the absence of bones, the functions of which are played by a skeleton made of cartilage. Both species generally have thick skin without scales. Another common feature is this, that the offspring most often develop in the mother's body and give birth to developed individuals. It is possible to recognize sharks and rays, who are pregnant.

This is a really common question. It is interesting, that number of divers, who do not have the slightest desire to meet a shark is basically the same as people, who would love to see them. Tenerife is surrounded by the Atlantic waters, so of course sharks are here, but the vast majority live at depths from 50 up to 1000m, so we do not meet them during recreational dives. So the sharks are here, but we are unlikely to meet them while diving.

An exception worth mentioning is Angel Shark, which, due to massive catches in the past, is on the list of endangered species. They can often be found in relatively shallow water where they appear during the mating season in spring, although they can also be found in winter and autumn. They stay in Tenerife until the birth of their offspring, so you can often see small sharks in the spring.

Angel Shark has a flattened body similar to stingrays and grows up to 2m in length. It buries itself in the sand waiting for the passing fish, crustaceans or molluscs.

This species is not dangerous to humans, but it can be provoked to deterrent behavior or even bite if molested by divers - most often waking it up at the bottom by jerking its tail.!

There are six species of rays on a regular basis in Tenerife. These are: Stingray - common, round and roughtail. Additionally, there are Eagle Ray (Eagle-shaped rays) , Butterfly Ray (Butterflies stingrays) i Marbled Electric Ray (Numb). They have very similar eating habits to Angel Shark.

The name Stingray comes from the venom spike, which all of them have by the tail and are used to defend themselves against other predators. They are not aggressive towards people and accidents with them are extremely rare. The slight distance, however, is indicated, as unfortunately the well-known Australian TV presenter and naturalist Steve Irwin found out., who was stabbed to the heart with a stingray thorn while filming.

Different species of stingrays have a similar body shape, common stingray is the smallest of these and is the lightest in color (sometimes called yellow).

The round stingray is dark in color and grows to over a meter from wing to wing. They are often found in larger groups, most often in caves or shady rocky places.

Roughtail stingray is a bit rarer but is easily recognized by its large size and strong long tail, which can reach up to two meters in length.

The eagle ray is similarly built to the stingray but has a very distinctive large head. It is easier to meet them because they rarely bury themselves in the sand and are often seen feeding on the sand.

Butterfly ray has an excellent camouflage in the form of a marbled yellow color, which makes it difficult to spot it in the sand. Its body is triangular in shape up to 1.5m with a small tail with a venom spike.

The marbled electric ray has a round shape, dark colored body with light brown dots. It is the smallest of the stingrays found here, growing up to approx. 60cm. It is called the electric stingray, because it can generate an electrical impulse that overpowers the prey or defends itself against predators. It is not recommended to admire these individuals very closely.

One thought on “Diving in Tenerife - sharks and rays.”