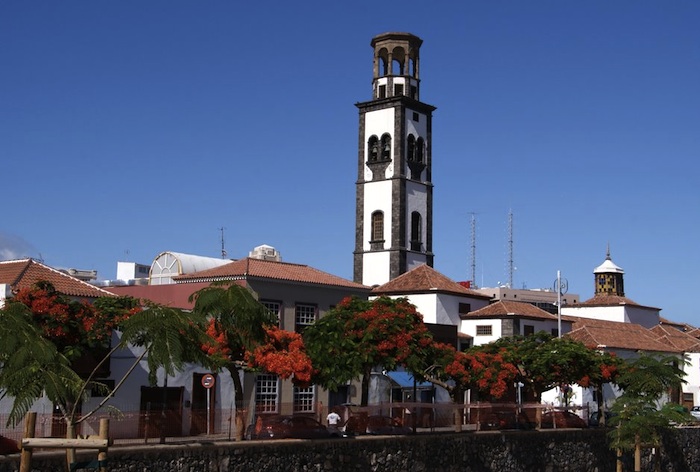 The administrative capital of Tenerife and the Western Canary Islands is big (200 thousand. residents), a dynamic and energetic city and an important port. In terms of population, Santa Cruz de Tenerife is surpassed only by Las Palmas de Gran Canaria. These cities have a long history of competition for the title of the capital of the archipelago. Consensus has been reached – they lead the archipelago alternately, in four-year terms.

In the bustling and busy center, you do not feel the rush characteristic of large agglomerations or the tourist atmosphere prevailing in the south. The easiest way to describe it is as a typical laid-back Canarian city.

Santa Cruz de Tenerife to miasto, which from the 17th to the 19th century. it has changed its face a lot. Due to the intensive development, some monuments were destroyed, nevertheless this, what's left, is really remarkable.

Wokół kościoła Our Lady of the Conception

You can start your visit to Santa Cruz de Tenerife right here, where it all began, that is, at the church of Nuestra Seńora de la Concepción, called the cathedral. Just steps from the temple, at today's Fundación stop ("Founding the city"), Alonso de Fcrnandes stuck a wooden cross into the ground (cruz) -symbol of the founding of the city. The first church, which was placed in this place in 1502 r., was thoroughly rebuilt in the 16th and 17th centuries. after the fire with 1632 r. The last renovation works ended in 1996 r. One of the greatest treasures kept in the temple is a wooden cross framed in glass and silver, which was allegedly driven into the ground after the victory over the Guanches.

The second is the British flag taken from Admiral Nelson after the failed assault on Santa Cruz de Tenerife.

Callle Antonio D leaves the church square. Alfonso – this graceful alley, called by the locals calle de la Nuria, is one of the oldest and most beautiful places. Carnival fraternities have their seats in low-rise, colorful tenement houses. You can also find some charming eateries here, which during the day serve dishes from the new Canarian cuisine, and in the evening they turn into bustling pubs. Near the calle de la Nuria stands the Museum of Nature and Man, go to wystawowa La Recova Art Center oraz Our Lady of Africa Market – indoor city market, where you can buy perfectly regional food products and handicrafts, and also do ordinary grocery shopping.

The next stop on the tour is spacious (more than 5 thousand. m2) Plaza de España with a marble fountain and fancy lamp strings, built in 1929 r. on the site of the fortress. The controversial Cruz de los Caidos monument stands almost in the center of the square, in honor of those who died during the civil war (1936-1939).

Built in 1944 r. the building is an example of typical frankist architecture. Theoretically at the top of a mighty cross, which is part of the monument, an observation deck has been arranged, but it is usually closed. The mighty neoclassical Cabildo Insular and post office buildings rise above the square. Right next to it, there is a square dedicated to the patron saint of the Canary Islands, Virgin of Candelaria. whose sculpture was placed in its eastern part. Beach de Candelaria is the main square of the city – the cafes around the city are the perfect place to rest for those tired of shopping on the city's largest shopping street, Castle Street.
The small Calle de San Francisco leads from Plaza de Candelaria to the rubber-lined San Francisco Beach, next to which there is a nice baroque church of St.. Francis from the turn of the 17th and 18th centuries. Behind the church, the Municipal Museum of Fine Arts is located in the charming Principe de Asturias square.

Some 10 a minute's walk west of the Plaza Principe Asturias stretches counting 70 000 m2 Garcia Sanabria city park – favorite place of the locals, which is perfect for morning jogging, yoga or an afternoon walk. Modern art installations can be admired amidst the exotic plants and trees in the northern part.

From the west, the wide Avenida de Veinticinco de Julio runs - heading south along the avenue, after approx 10 minutes to the lovely Plaza de los Patos, which has a climate a bit like Andalusia.

In the center there is a round fountain with a duck (duck) in the middle, around which is lined with typical Andalusian ceramic tiles (tiles) benches. The Templo de San Jorge rises at the square, taken alive from the English countryside. You can take the road and go from the square along Costa y Grijalba street to Plaza de Toros, built in 1892 r. areny corridy, where concerts and cinematographic shows are now organized.

South of the Płaza de los Patos is the heart of Santa Cruz de Tenerife – plac General Weyler, and next to it the white Capitama General building, former seat of the General Captain's Office (the institution governing the new lands appointed by the kings of Spain).

Po 15 a min walk along the port from Plaza de España to the fascinating Auditorio de Tenerife, by the famous architect from Valencia - Santiaga Calatrava. Built in 2003 r. building, considered a pearl of modern architecture, it quickly became a symbol of the city – residents are constantly arguing about it, which in fact represents its unusual shape. The building serves as a concert hall and the seat of a symphony orchestra. Several dozen meters from the auditorium there is Parque Maritimo Cesar Manrique, beautiful sea water pools designed by the famous architect from Lanzarote Cesar Manrique.

Museum of Nature and Man

The Museum of Nature and Man is housed in a beautiful building of the former hospital. Inside, you can admire, above all, exhibitions related to the natural history of Tenerife: with the life of the Guanches (mummy, tools etc.), volcanic activity, fauna and flora.

The City Museum of Fine Arts right on the beautiful Plaza del Principe presents a collection of Canarian paintings, Spanish and Flemish masters, such as Ribera, Sorolla, Breughel, van Loo i Jordanes. There are also temporary exhibitions.

Military Museum north of Plaza de España from 1988 r. presents the history of the island from a military point of view. In the halls of the facility, you can see a collection of military uniforms as well as firearms and white weapons used during the conquest. The greatest treasure is the El Tigre cannon ("tiger") - according to legend, a bullet fired from this cannon severed General Nelson's right arm, when he launched an unsuccessful assault on Santa Cruz de Tenerife.